Greater Bogota Convention Bureau won the award for effectively using storytelling and digital channels to mobilise its local community, and using the One Young World Summit bid as a driver of change. ICCA announced the winner this year’s ICCA Best PR Award during the Closing Ceremony of the 54th ICCA Congress in Buenos Aires, Argentina. 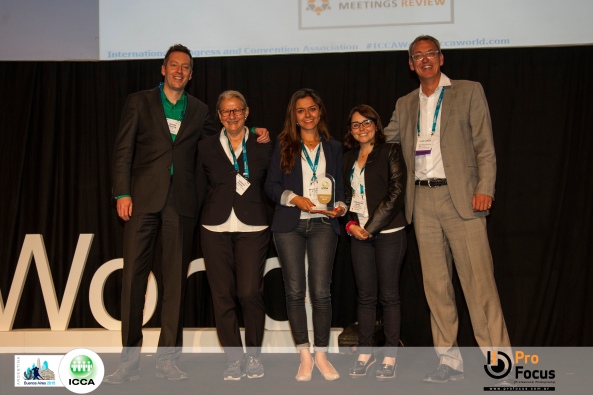 Bogota used its bid for the One Young World Summit to showcase the transformation process Colombia is going through, and to contribute and lead this transformation process as the capital city. The Colombian capital’s winning bid to host the 2017 edition of the event was running against Belgrade, The Hague and Paris.

As a communications strategy Bogota created a story based on the transformation of Colombia: From being a failed state to the eyes of the world, to becoming an emerging global player. The Bogota Convention Bureau’s PR campaign transformed the event into a national initiative, engaging and empowering the local community and decision-makers to join the OYW Bogotá 2017 movement and to make them understand the importance of hosting this event, with the slogan “We want to create our future with OYW”.

Linda Garzón, Marketing and Events Manager of Greater Bogota Convention Bureau: “In Bogotá we understand the events industry as a powerful tool that can be used as an agent of change to consolidate different productive sectors and relevant initiatives of the city and the country. But it is through the power of people that we can reach the best results”.

Sandra Garcia, Executive Director of of Greater Bogota Convention Bureau: “We were already very honoured to be on the shortlist of this presitgious award, listed amongst the best of the best in our industry. They all developed amazing PR Strategies, so we feel we won twice”.

Johanna Fischer, Chairperson of the ICCA Best PR Award Judging Panel: “Bogota’s  campaign strongly included all positive elements that give a natural flow to good PR: engaging local expertise and celebrities, speaking with one voice as a destination and motivating a strong committment to win he bid for OYW; plus using a young and fresh approach in communication and visuals – all resulting in an impressive movement and national pride over the achievement made. It is a fine example for “feeling” the intellectual capital as part of the DNA of the destination”.

Congratulations also goes out to the other 4 finalists, who shared their sucessful PR campaigns with other ICCA members in an educations session at the record-breaking 54th ICCA Congress in Buenos Aires, Argentina, called “PR Excellence”: Brisbane Convention and Exhibition Centre (BCEC), Dubai Business, Glasgow City Marketing Bureau and London & Partners.

ICCA in the news